From the Foundation President

The Foundation’s assets continue to see strong growth, with total assets of $76.5 million and endowed assets of $54.1 million as of June 30, 2014. The majority of the investment is being managed by Spider Management, and approximately $19 million of investment return has been added since July 1, 2010. The Foundation Board has strong confidence in the team at Spider Management and looks forward to a long partnership.

We are also very excited about the new construction of the Norman H. and Elsie Stossel Upchurch University Center. Mrs. Upchurch ’43 provided the lead gift, serving as the cornerstone of a student center that will enhance the Longwood experience for many generations of students to come.

The Foundation looks forward to supporting Longwood—and its mission to develop citizen leaders—for the next 175 years.

I would like to take this time to thank all donors and friends of Longwood University for their commitment to growth at this great institution. This has been a year of transition at Longwood University. During 2013-14, the university welcomed W. Taylor Reveley IV as the 26th president and successfully completed its second comprehensive campaign, raising more than $41 million in gifts. Similar to other institutions after a successful fundraising campaign, our donations have experienced a decrease as we take a break and develop new fundraising strategies for the future. For the fiscal year ended June 30, 2014, we received $2.8 million compared with $8.3 million for the fiscal year ended June 30, 2013.

On July 1, 2010, we moved our investment portfolio to the Richmond Fund of Spider Management Company. Spider Management Company’s philosophy is aligned with our own: preservation of corpus, absolute rather than relative performance, a fully diversified portfolio and a long-term horizon. Inherent in this philosophy is that we expect to surpass the market during down years and that the market will surpass us during up years. However, we also believe that the long-term portfolio returns will provide us with steady and dependable returns that will match or exceed the long-term market returns.

According to the 2014 preliminary NACUBO-Commonfund Study of Endowments, the average return for fiscal year 2014 was 15.8 percent net of fees. The Foundation’s 15.6 percent return is not that far off from this national average. Spider Management’s investment philosophy continues to provide strong returns, enabling the Foundation to exceed our distribution needs. 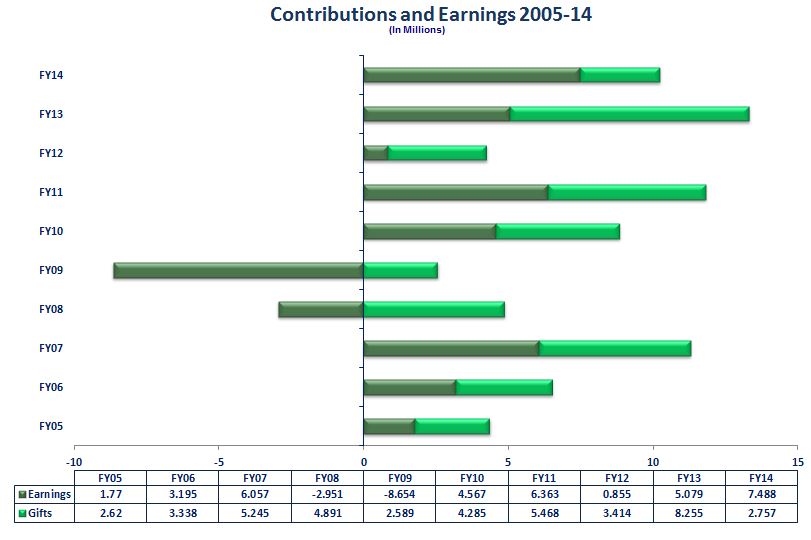 A goal of the Foundation is to achieve investment performance that supports stable endowment spending from year to year, which provides predictable funding for programs. The Foundation Board of Directors approved a spending rate of 4 percent of a 12-quarter average. The use of an average over a longer period of time reduces fluctuations caused by the highs and lows of the market.

The overriding principle for this rate is simple: Funds should be managed so that a gift today will fund a donor’s objective in perpetuity. According to the 2013 NACUBO Commonfund study, the average annual effective spending rate for educational endowments in fiscal year 2013 was 4.3 percent. Our effective spending rate continues to lag behind this national average.

Prudent decisions such as this have enabled the Foundation to sustain the distributions to the university for scholarships and operating programs until the endowments have grown sufficiently to handle the distributions. 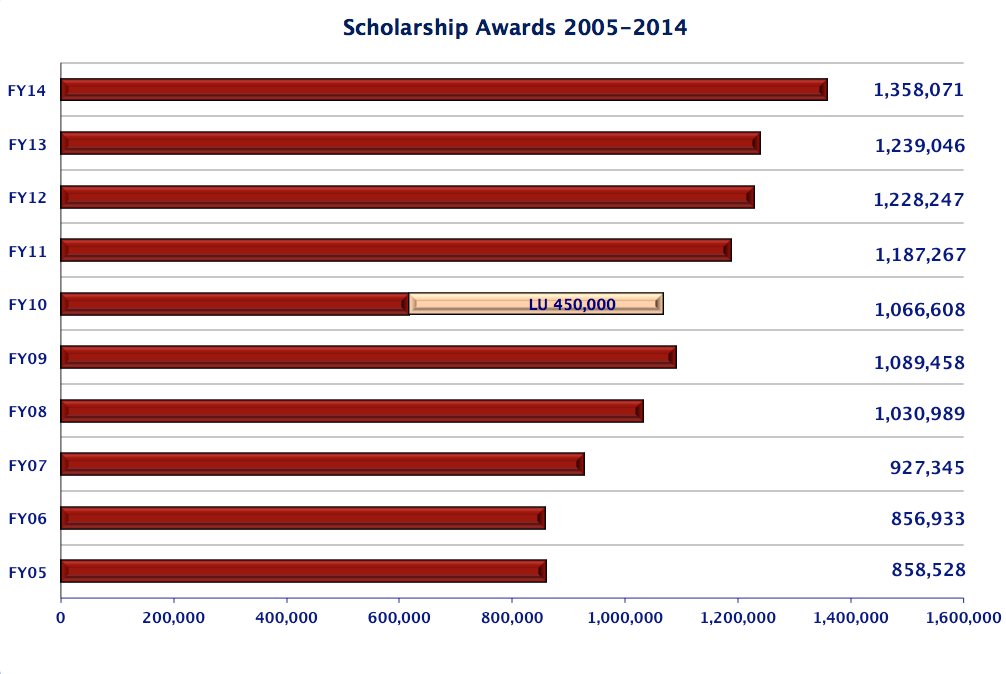 Cherry Bekaert LLP conducted its annual independent audit and the Foundation received another clean audit report. A copy of the annual audited financial statements can be found on the Foundation website at www.longwood.edu/foundation.html. Following this summary, I have included a more detailed report that highlights our endowment activity and the Foundation’s management policies.

This report has been prepared to provide information about our donor-raised funds and the management and performance of the Longwood University Foundation’s Pooled Investment Funds.

The Longwood University Foundation Board of Directors delegated the investment management of the Pooled Investment Funds to the Investment Committee, which operates within the parameters of the Investment Policy Statement.

The Investment Committee seeks investment returns through a diversified investment portfolio consistent with the approved Investment Policy. To achieve its investment objective, the Foundation has retained an independent investment firm to provide ongoing evaluation of economic conditions, review manager performance, and provide advice on asset allocation and performance enhancement.

The Foundation Board of Directors has adopted the strategy of investing endowment assets to preserve the long-range purchasing power of the endowment, which provides intergenerational financial support for programs that the endowed funds were created to benefit.

The endowed funds held by the Foundation provide a consistent level of support for current and future needs of the university. The primary investment objective for the endowed funds is maintaining the purchasing power of each individual endowment over time by reinvesting part of the endowment’s earnings and appreciation each year. If the principal value of the endowment grows at or above the rate of inflation, an increasing stream of income will be generated to meet the rising costs of education, research and campus life. The chart below represents the fair market value of the endowment funds for each fiscal year over a 10-year period. 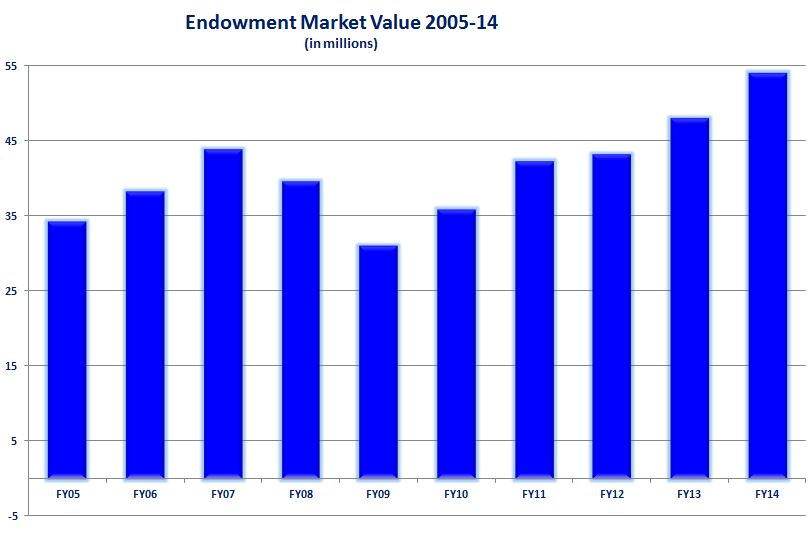 The endowment’s performance is calculated on a total return basis, which measures the performance of equity, fixed income and alternative investments. Total return (for purposes of this report) is the combination of income, dividends and gains/losses for the fiscal year net of investment management fees. Investment performance is determined on the endowment as a whole rather than on each separate endowed fund. Depending upon the timing of additions to an individual fund, returns on a specific endowed fund may vary from the total results.

Many important university activities could not be achieved without the financial support from the Longwood Fund. This year, these funds made the following activities possible:

These are only a few of the activities our unrestricted funds have been used for during this past year. We are fortunate to have donor-provided funds that support systemwide university programs. The “Support by Purpose” pie chart depicts the various sectors of the university the Foundation has aided during the period covered by this report. 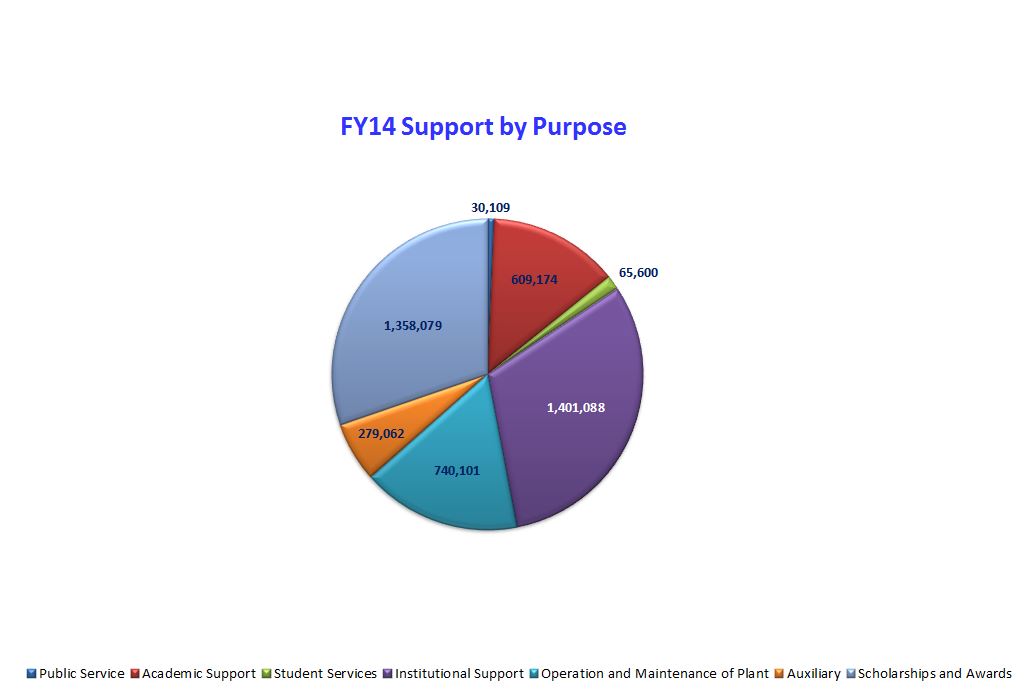